Eliminating the risk of Gulls attacking

Eliminating the risk of Gulls attacking

Our client, Subsea Engineering a construction and services company were experiencing problems with Gulls on their site.

There were two main issues. Gulls were dropping stones on the solar panels and Antrim glass roof causing damage and expense in repairs and Gulls posed a risk in attacking staff when protecting their young.

The building was a prestigious building with a complex roof structure. There was a green roof, glass roof, solar panels and various plant separate by single pathways and boarders.

Herring Gulls had been regularly attempting to breed on the roof around the solar panels. These Gulls were noisy and aggressive when in breeding period. The situation was undesirable for the following reasons:

The client had concerns about the aesthetics of a net on the roof in certain areas such as where the solar panels are present. It was possible to net the area in a way that was not visible from the ground and not allow Gulls access to the area to nest as well as preventing them from getting to the stones. Zips were also installed to allow access for maintenance.

There were 2 main bird proofing solutions in preventing birds from gaining access and nesting in these areas. 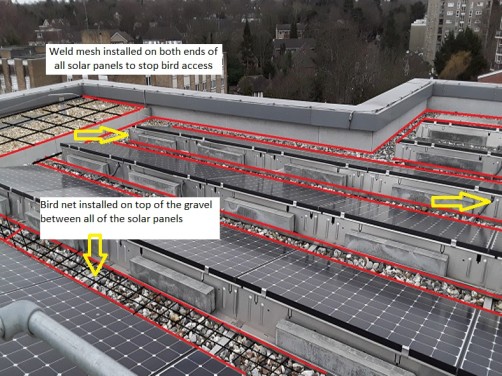