NBC Environment were contacted by East Lothian Council to advise and provide a humane solution to prevent feral pigeons constantly fouling on a busy pedestrian walkway and road.

The bridge structure provided a perfect habitat for feral pigeons due to the numerous beams and ledges underneath the bridge which was an ideal roosting and nesting opportunity for approximately 200 feral pigeons. Consequently there was a large build up of pigeon faeces on the ground.

This activity presented a hazardous slip risk every time it rained, and people were at risk of being hit by pigeon faeces, nesting materials and eggs, which regularly fell from the structure as pedestrians, pushchairs, wheelchairs and cars passed through.

As well as people walking and possibly slipping there was a greater risk for people who were already unsteady on their feet having a more serious accident such as breaking bones. There was also a higher risk for children in buggies being hit in the face and eyes and car drivers could be startled with an unexpected item hitting their windscreen and could lose concentration and potentially have an accident.

The birds were also creating a risk of contamination and disease from the heaped levels of bird faeces and nesting materials which were accumulating under the bridge. Particularly risky for those working and maintaining the rail structure or for those constantly breathing the dry dust, which have bacterial spores, as they pass regularly along the pavement.

From a wildlife perspective there also were concerns raised by the public on social media that chicks might be killed and a number of viable eggs could be destroyed when the cleaning and proofing of the bridge took place.

The council wanted NBC to provide a proofing solution to deter the pigeons, clear and sanitise the area and to work with a third party in order to save the chicks and viable eggs where possible.

NBC Environment was responsible for the design of a non-penetrative netting and spiking solution. Network Rail wanted to ensure we did not damage the bridge and to ensure that they could easily gain access for maintenance without significant cost and damage done to the installation. NBC installed a stainless-steel supporting wire framework with clips and clamps and avoided drilling into the structure. NBC also produced a risk assessment and a safe method of work to complete the installation to Network Rails specification, as we would be working on their bridge. They wanted to ensure it did not damage the integrity of the bridge, be practical for maintenance and covered the additional risk of working near a live railway line, so that there was no risk of electrocution and the work would not impact the fast-moving trains.

The council team arranged for permits and for the road closure and signs to be put up in advance, so that the community was aware. The road was to be closed for three days and NBC agreed to complete the work over the weekend so as not to delay commuters when completing the work. Network work rail informed their train drivers on the days were working and they agreed the materials and method for the installation

NBC consulted with the client and agreed before the commencement of works that we would use our MEWP access equipment to carefully access and remove any chicks and eggs before work commenced and with the support of the council arranged to give them to a rewilding centre in order to avoid any unnecessary risk to the birds.

Two IPAF Trained Operatives were able to work from a mobile elevated working platform to complete the bulk fouling removal and biocide clean of the bridge where the birds were nesting and perching before the netting and spiking was then installed.

Whilst completing the work it was clear the pigeons could access areas inside the structure which we could not get into, so we had to ensure that no birds became trapped behind the netting. The gaps from the back of the structure were also bird proofed using mesh to reduce the risk that birds could inadvertently get stuck behind the net and we provided one way bird escape hatches for the birds to escape from once the final installation was completed.

"The project was a success in that the pigeons were safely excluded from the area, chicks and eggs were saved and will be reared and returned to the wild. As well as the pedestrian route under the bridge now being safe and free from guano build-up. Vehicles can also now pass under the bridge without fear of being struck by falling debris and pigeons flying out onto oncoming traffic. Successful partnership working between NBC, the Local Authority and the wildlife rescue charity as well as managing public interest was the key to this successful project." 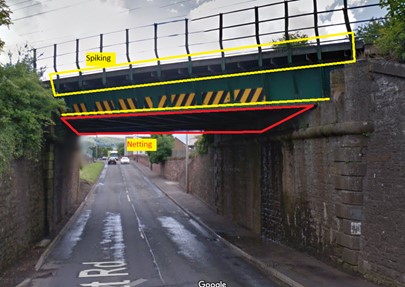