Gull populations have been in recovery since they were granted protected status by the Wildlife and Countryside Act of 1981, which makes it illegal to kill or injure a bird, or to move or destroy an active nest. Gulls are moving inland and rooftop nesting has quadrupled across the UK over the past 15 years.

Gull behaviours and lifecycle mean they can become a recurring problem in particular locations. Both industrial areas and city centres offer plentiful opportunities to find food and the birds have adapted to scavenge from business premises, landfill sites and waste bins. A nesting site in close proximity to humans brings with it numerous hazards, and so-called urban gulls are becoming a ‘nuisance’ bird across many parts of the country.

Cardiff is becoming one of the largest breeding grounds for urban gulls in the world and the population is projected to grow to 5,000 breeding pairs by 2020. This brings with it problems relating to noise, mess and health and safety, which can impact upon residents, visitors, and businesses. This fact certainly hasn’t been lost on the owners of St. David’s Dewi Sant. Shopping Centre – one of the busiest retail destinations in Europe.

Over 30 million shoppers are attracted to the 200 stores on-site at St. David’s, which collectively generate over £7.5 billion each year. However, this shopping mecca is also ideally suited to gulls. The nine storey building offers perfect vantage points from which the birds can locate food; with over 20 restaurants based at St. David’s, which range from Italian to Mexican, by way of Sushi, there are plenty of feeding opportunities. Also, the high roofs are free of predators, making them prime real estate for nesting gulls.

Over time urban gulls have become accustomed to living alongside people and the birds have largely lost their fear of humans. Visitors, delivery drivers, and shoppers were being regularly mugged for food and the situation was even worse in the summer months as the gulls became more aggressive as they sought to feed and defend their young.

The shopping centre had previously deployed falconry but the results had been less effective than hoped, so St. David’s called in NBC Environment.

Gulls are intelligent birds and will not nest anywhere were there may be an active population of predators. Therefore, falconry is used to discourage birds from settling and is a key tool in gull management. That said, Cardiff has the highest population of Lesser Black-Backed gulls in the UK, and is also home to significant numbers of Herring gulls – two of the largest gull species in the world. There have been cases of gulls attacking falcons at displays, so the bird of prey deployed would have to have presence…

Enter the Harris hawk: This impressive bird has a wingspan of up to 120cm (47in), it originates from the North and South Americas so European gulls are simply not used to seeing them. Harris hawks are also supremely maneuverable – making them ideal for working in urban locations – all-in-all they are capable and intimidating enough to see off all but the most fool-hardy gull.

A falconry programme was initiated in which a hawk was flown three times per week in the areas that attracted the most gulls – namely the service yard area, where the bins are kept, and certain roof areas where the gulls perched or nested.

Any animal’s key motivation is self-preservation. Persuading ‘nuisance’ gulls there’s an active bird of prey around St. David’s Shopping Centre discourages them from scavenging and nesting in the vicinity.

By tapping into those natural instincts, NBC Environment has been able to modify patterns of behaviour to make the area less desirable. These efforts have worked in tandem with Cardiff City Council’s own gull programme. This has aimed to reduce the birds’ access to food by issuing gull-proof waste bins and refuse bags to residents and businesses, and by deploying additional street cleaning teams during breeding season.

The centre’s management and staff, as well as delivery drivers have all commented on the reduction in gull numbers. Most tellingly, no nests were found at St. David’s Shopping Centre for the first time this year.

For further information read our article "How to get rid of Seagulls". 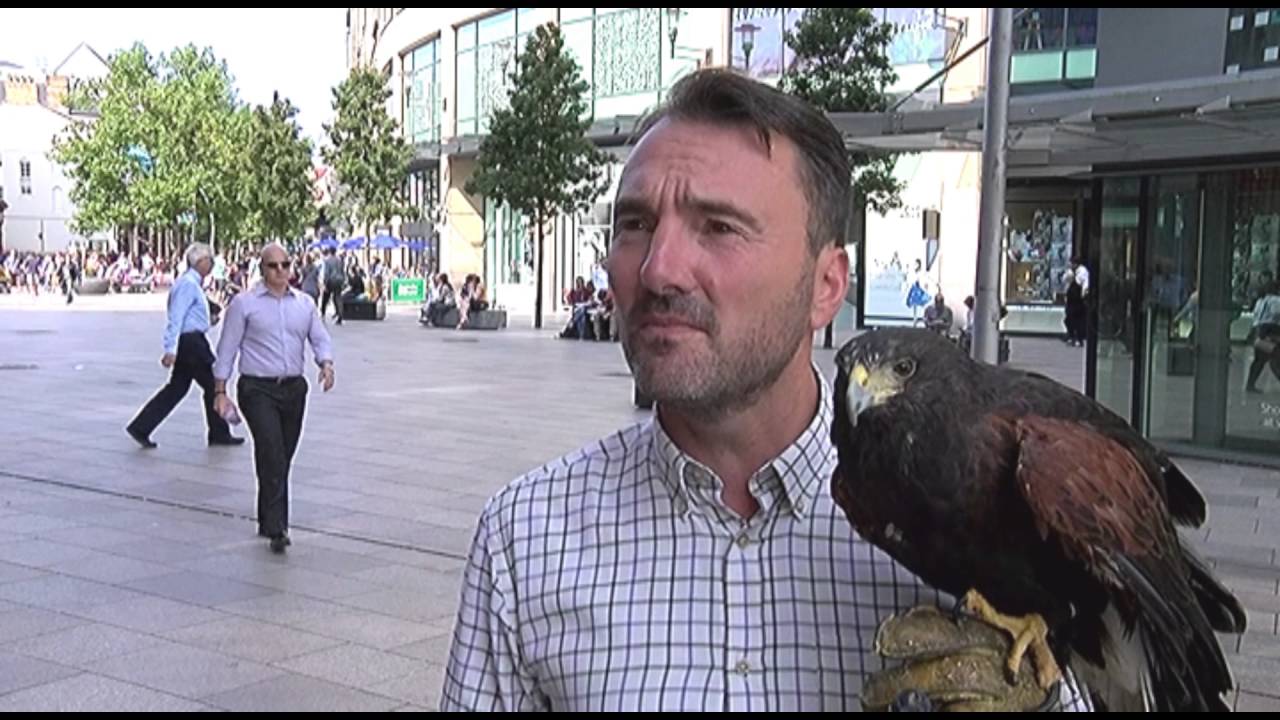