Where Do Seagulls Nest?

Traditionally, seagulls nest on cliffs and sand dunes but when it comes to ‘urban’ seagulls and if cliffs are not available, the seagull will find a building or a roof on which to nest.

Seagulls have interesting nesting habits and will adapt these habits to their environment, which isn’t always in agreement with their human neighbours. They will often find a safe roof to make their nests on with a good view to spot any potential danger.

When do Seagulls nest?

Generally, nesting for seagulls begins April or early May and goes through until the middle of July. They will lay 2 to 4 eggs which take three weeks to hatch, and the little gulls will stay in the nest until they are around six weeks old and ready to leave.

Another interesting fact about nesting seagulls is they use the same nesting sites each year. Therefore, if you have seagulls on your roof making lots of seagull noise during May, June and July, there’s a good chance you’ll see them back next year! 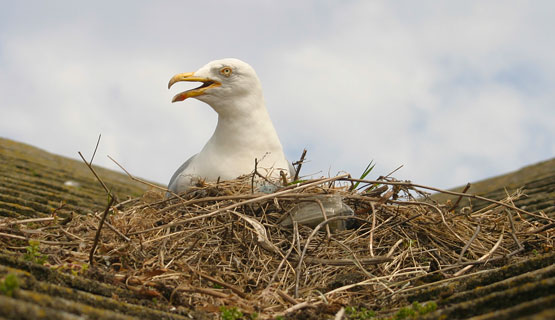 Can you remove Seagulls nests?

All birds are protected by the Wildlife & Countryside Act 1981 and like any bird, when it comes to seagull nest removal this can only be done with the appropriate license by a professional bird control company. Timing is crucial for effective and legal control if gull nest removal is required.

Seagulls have a reputation for not being the friendliest birds, and if you were to try and remove a seagull’s nest, chances are you are going to anger the parents. So, in addition to the fact it’s against the law to remove an active seagull nest, you really don’t want angry seagulls dive-bombing you.

While the sound of seagulls may remind of us of days out at the seaside, it you live near nesting seagulls or run a business, the call of seagulls is not so agreeable.

One example is Kittiwake gulls, which have a call from which they get their name. They use, a shrill ‘kittee-wa-aaake, kitte-wa-aaake’ and gather in large, dense and very noisy colonies.

The Grand Hotel in Scarborough found nesting Kittiwake gulls were causing major problems when annually nesting of the ledges of the hotel instead of cliffs! The Kittiwakes would attack guests on balconies and create an enormous amount of noise and disturbance. Not to mention the mess they caused and damage to the building.

With the use of seagull deterrents such as bird netting, installed while avoiding the nesting period of the Kittiwake gulls, even on a Grade II listed building, the gulls were moved on.

In addition to seagull nest removal, there are several other methods of seagull control to deal with nesting seagulls and the associated noise and seagull guano problems, including:

If you have a gull problem and need advice, talk to our local professional teams on 0333 567 2020 or book a survey and get a quote today.