What birds of prey are used to deter birds?

Falconry, also known as hawking, is used as a bird deterrent to encourage pigeons, gulls or other pest birds away from an area to encourage them to find alternative nesting and roosting locations. Bird of prey pest control works as the pest birds react instinctively to the threat of a natural predator.

Hawks and falcons are used to deter birds, here’s some of the birds of prey used in falconry and hawking:-

Native peregrine falcons and peregrine hybrids, also known as longwings are very successful as a bird deterrent in large open areas. When the nuisance birds sees a falcon stooping in hunting mode, it really is the ultimate deterrent. One peregrine falcon can provide an effective control session of two to three hours and is very efficient bird control specialist. They are a great bird of prey for landfill sites to control large numbers of seagulls or at sites like power stations. 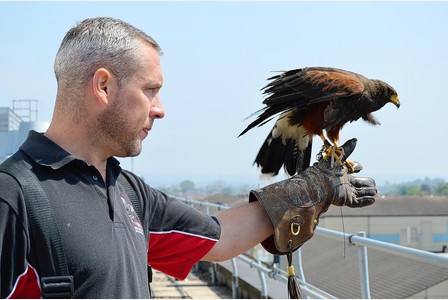 Harris hawks are very versatile and one of the best birds of prey to use in urban environments. They are extremely agile and obedient, making them ideal for flying where space is restricted, or roof access is difficult. Harris hawks are most successful at controlling feral pigeons in town centres, warehouses, industrial estates, football stadiums, hotels and hospitals.

The Lanner falcon is the smaller cousin to the peregrine falcon, an African species and a versatile all-rounder. While a Lanner is a longwing they can be flown in slightly more enclosed areas than a peregrine, being easier to handle and a more reliable bird control falcon. They are very effective at scattering feral pigeons and seagulls at landfill sites, retail parks and large industrial areas.

As one of the smallest falcons, the Merlin is an efficient bird controller against sparrows and starlings. Also known as a pigeon hawk, although they are really too small to deter pigeons on a regular basis, but they are extremely agile and fast falcons.

The sparrowhawk is known as a shortwing hawk, their short rounded wings gives this bird of prey tremendous acceleration on short runs. As a natural predator of sparrows and starlings, they need an experienced hand to fly, but are effective in deterring roosting starlings, when flown in the early mornings or late evenings.

Advantages of Bird of Prey Control

Bird of prey control has many advantages, firstly there is nothing to be installed or maintained which means the problem of nuisance birds can be resolved quickly. Our professional, qualified bird of prey handlers have strong bonds with their birds to maintain control over them.

Removing or dramatically reducing nuisance birds using falconry is an environmentally friendly and humane form of bird control. Our hawk and falcon bird control experts can provide the right advice as to the best bird of prey deterrent. To find out more, talk to a member of our team by calling 0333 567 2020 or book a site survey today.