What are the signs of cockroaches?

Cockroaches are usually inactive during the day and tend to hide in the vicinity of a ready water source such as taps, sinks and drains. Signs that may indicate a cockroach infestation include: 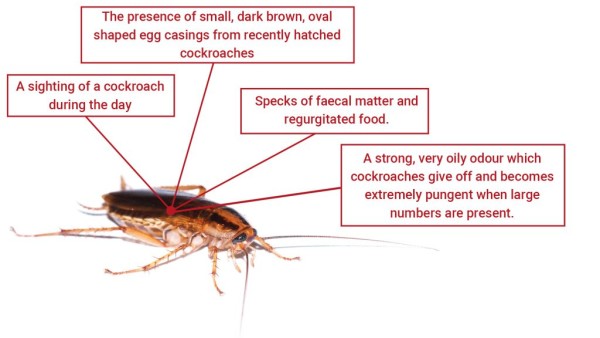 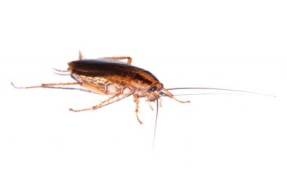 German Cockroach (Blattella Germanica)
The German cockroach is the UK’s most common type and is a smaller species, typically ranging between 1.1 – 1.6 cm in length. Adults can be easily recognised by their colouration which is light brown or tan with two dark, roughly parallel, streaks located on the pronotum immediately behind the head. They do not bite or sting but they do live in areas that harbour dangerous bacteria, such as sewers and rubbish bins. Unfortunately, this means they could introduce harmful bacteria carried in on their bodies to commercial environments. 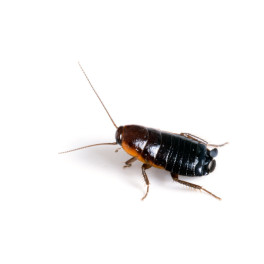 Oriental Cockroaches (Blatta Orientalis)
Oriental cockroaches are a larger species of cockroach. They’re shiny and dark brown or almost black in colour.They’re known to thrive in cool, damp areas such as drains and sewers. One of the more dangerous in terms of bacteria, the oriental’s liking to water often leads them to sewers and other sources of bacteria-ridden water. 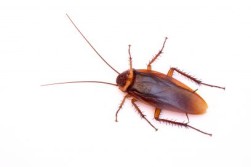 The American Cockroach is not common in the UK and are considered a large species that can grow up to 3.2 – 5.4 cm. They’re known as the ‘Palmetto bug’ because they live on trees. They prefer dark, humid and undisturbed.

Brown Banded Cockroaches (Supella longipalpa)
Brown Banded are a small species, typically ranging between 1 – 1.5cm in length, and can be identified by yellow-brown stripes across their abdomen. They’re known to like warm, humid environments like heated buildings burrowing in ceilings, attics and other warm environments.

If you have seen signs of as described above then we recommend you take action quickly and speak to a professional. You can speak to our team of expert pest control technicians for advice or to arrange a risk assessment to understand the extent of the infestation. Contact us.