Pigeons may be one of the most intelligent birds on the earth, but typically in urban towns and cities they’re often unwanted guests. They can be difficult to remove from buildings and deterring pigeons is a job for a professional bird control company.

Pigeons like to roost and nest within or on buildings and tend to live in flocks which can consequently cause problems. 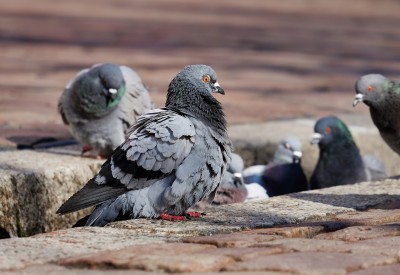 There is no strict division between pigeons and doves, who share many features and belong to the same family of birds.

Feral pigeons, those which we see in urban towns, are descendants of the Rock Dove. Feral pigeons also known as ‘flying rats’ come in a variety of colours, commonly black, grey, blue, purple, and white with different coloured patches on their wings. These pigeons start to breed in March, and can go on to breed four or five times a year. The pest pigeon problem is exacerbated by people feeding them or where there are food sources which attracts the feral pigeons and lead to many of the above problems.

The woodpigeon is the largest and most common pigeon.  They are largely grey with a white neck patch and white wing patches, clearly visible in flight. The difference between feral pigeons and woodpigeons is that woodpigeons are shyer and prefer to eat vegetable matter such as nuts, seeds and berries found in the countryside. 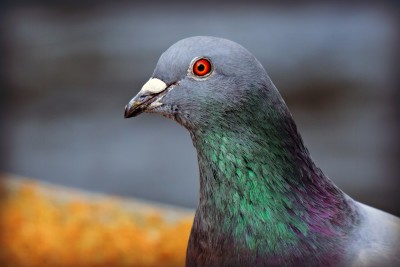 Stock doves are similar to rock doves and feral pigeons, being largely blue grey with an iridescent bottle green band on the back of the neck and a pink chest. They live throughout the UK, except for parts of northern Scotland and Ireland, but are found in large numbers particularly in the English Midlands and South West.

The rock dove has long been domesticated and ‘escaped’ to live wild as today’s familiar urban ‘feral pigeon’ that we know so well. The wild rock dove is now only found on the north and west coasts of Scotland and on Northern Island coasts.

If you are experiencing issues with nuisance birds or pest pigeons, contact us today for advice on 0333 567 2020 or book a Free site survey.