Seagulls are intelligent small to large seabirds which inhabit coastal areas and inland urban areas. There are many types of seagulls but most are white, grey and black when mature. When gulls are nesting they will return to the same site each year unless access is restricted, the site is rendered unusable or there is a gull deterrent in place.

Seagulls are exceptional flyers and have strong legs which provide good mobility on land or a rooftop. Their diet is varied and they are superb scavengers often seen around urban areas where refuse is unsecured or litter is regularly discarded.

Nesting commences in February/March and a typical gull clutch will consist of 3 eggs with both sexes incubating although some do so singly. Once gulls have built their nests and had young they can become very aggressive if they feel their nest is threatened, this is often a problem in urban areas.

Seagulls are habitual so if you have gulls nesting this year they will back to nest next year. You can also expect twice the number as this years young will return also, its imperative you have have a seagull management plan in place before they start nesting

If you have or have had a seagull problem it is recommended you should consult an experienced bird expert rather than a general pest controller.

Get NBC Environment expert advice and recommendations on gull deterrents by calling 0333 567 2020.

Gulls will only recycle new eggs once a year as they have to incubate the eggs for a period of 31 days. If the eggs are removed before being incubated the gulls will continue to recycle. If the eggs are incubated for too long there is a risk they will hatch, once hatched the baby gulls are then protected. Generally the gulls will be present on the roof for a period of 6 months each year and return in greater numbers as the young become mature after 3 years and return to their natural breeding site. 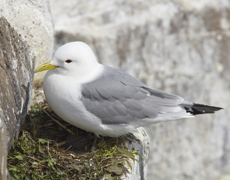 The kittiwake is of a medium size and has a grey back and a white underneath. Its bill is yellow and short and its legs are short and black. Kittiwakes also have a black tip to their tail.

Similar in appearance to the herring gull, the common gull is seen less in inland areas but is seen frequenting urban areas in winter. With a light grey back and black wing tips, the common gull has greenish legs and a yellow bill.

The lesser black backed gull has a dark grey to black back and wings with a white underneath. It has a yellow bill and legs and is indigenous to Europe, with 40% of the population based in the UK. It has an ‘Amber’ status in the UK due to concerns of a decline in the UK.

Read our article "How To Get Rid of Seagulls" for further info.