How To Get Rid of Flies

There are many different species of true flies, most are just casual intruders, however, some have the ability to leave you with more than you bargained for…….

One such fly is the house fly, known for being a vector of diseases, the house fly comes close to the top of the list of Public Health Insect species.

House flies – where do they come from?

The House fly (Musca domestica) is believed to have evolved at the beginning of the Cenozoic era some 66 million years ago.  Thought to have originated in the Middle east, through their later relationship with humans, they made their way across the continents through human migration.

House flies can breed rapidly when food sources and temperatures are at their optimum.

Each female house fly can lay up to 500 eggs in her lifetime, in several batches of about 75 to 150. The eggs are white and are about 1.2 mm in length, they are deposited by the fly in a particular place usually close to dead and decaying organic matter, such as food waste, carrion, or faeces.

Within a day, larvae (maggots) hatch from the eggs, they live and feed where they were laid.  Whitish in colour, the larvae can   measure from 3 to 9mm in length, thinner at the mouth end and legless.

At the end of their third instar (growth spurt) the larvae crawl to a dry, cool place into which they will pupate.  The pupal case is cylindrical with rounded ends, about 1.2 mm long.  Pupae complete their development in two to six days at 35 °C (95 °F), but may take up to 20 days or more at 14 °C (57 °F). 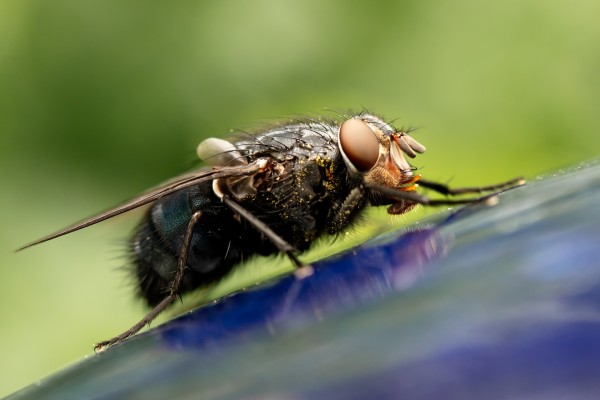 In most countries of the world, the house fly of today is considered a huge risk to public health for many reasons.

House flies are a nuisance, disturbing people both during work and whilst enjoying our leisure time, but mostly, they are disliked because of their habits and the contamination of foodstuffs.

Flies alternate between breeding in many different sites and feeding in a variety of different places including feeding on human foods.

Their feeding method is one area allowing for the spread of disease through two points of contact with a food source.

Disease-causing organisms on the outer surface of the housefly may survive for a few hours, but those in the crop or gut can be viable for several days.

Usually, the main routes to human infection are through the housefly's regurgitation and defecation.

Flies can taste using their feet!

This is all down to the taste receptors being located on their lower legs and feet.  When a fly lands on your food, they often have a good wander round before deciding which part to eat first, thus depositing any bacteria they have accumulated, all over your food!

Flies cannot digest solid food, a house fly will regurgitate digestive juices onto solid foods and these juices break down the food into small pieces, allowing them to use their mouthparts, called proboscis, to drink the meal.

Because of their diet of liquid food, their digestive system can move quite quickly, meaning they can often defecate at the same time as they are feeding – potentially on your food.

The most obvious signs of house fly activity are the flies themselves.

Adult house flies are active during the daytime (diurnal) and rest at night.  If inside a building after dark, they tend to congregate on ceilings, beams, and overhead wires, if outside, they crawl into foliage or long grass, or rest in shrubs and trees.  In cooler climates, some houseflies hibernate in winter, hiding in cracks and crevices and gaps in woodwork.

The larvae (maggots) of the house fly can be found in many areas around the home.  The bottom of rubbish bins, old food spillages, pet food and animal waste.  The presence of maggots can be an indication of a potential fly infestation.

The presence of “fly spots” can also be a sign of house fly activity, because of their liquid diet and fast acting digestive systems, flies defecate on many of the places they land, leaving black spots of faeces on fly alighting surfaces. 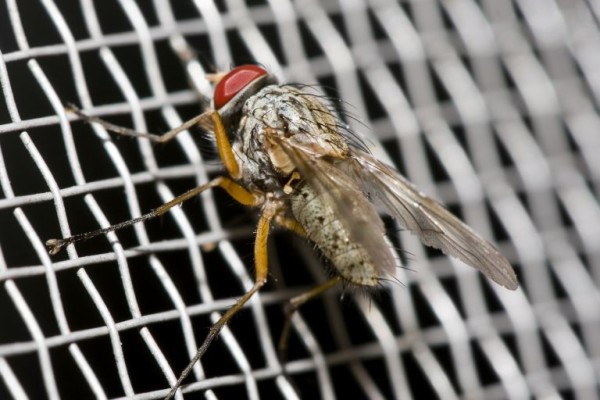 The successful control of house flies depends on the removal of all potential food sources and breeding sites to help prevent infestations before they start.

Keeping food covered when unattended, keeping food in sealed airtight containers. Keeping rubbish bins away from open doors, keeping doors closed when not in use.

A “fly swat” can be a favourite method of control, however, house flies process visual information around seven times quicker than humans, enabling them to identify and avoid attempts to catch or swat them, since they effectively see the human's movements in slow motion.

Insecticides can be used to help control flies, however, many of these are in the form of sprays and will only control the adult flies, thus leaving the larvae and pupa to reach the adult stage and continue the infestation.

Electronic fly control units are a non-toxic method of flying insect control.  Most flying insects are attracted to ultraviolet light.  The units give off a UV output through the light tubes, that attracts certain species of fly. The fly control units have built-in electric “kill grids”, which, when touched by the fly, send an electric shock, killing it on contact.

For a large infestation, the fly control services of a pest control company using professional insecticide products can be the best solution.

The pest control company can identify the species of fly, put a treatment plan in place to control the activity, and offer advice on measures that can be put in place to help prevent the problem from reoccurring.